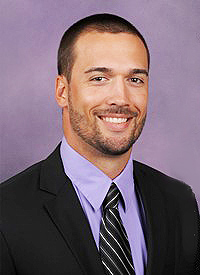 Following his undergraduate degree in Health and Exercise Science, Chad attended Northwestern States graduate program for Sport Administration. While in his graduate program, Chad was a part of an International Publication for a study comparing physically active to non-active students regarding cognitive ability. He also took part in being the Northwestern State volleyball and track programs as their strength and conditioning coach. The Health and Human Performance department inducted Chad into the NSU Academic Hall of Fame and named him Graduate Student of the Year in 2009. In his final semester of graduate school, Chad was one of two chosen to be an intern for the University of Texas Strength and Conditioning department where he helped design and implement strength training programs, speed, agility and power development programs for football, volleyball and tennis. Chad graduated with his Master of Science degree at the top of his class with a 3.9 GPA.

While in Austin, TX Chad began working for AIRROSTI Rehab Centers as a Certified Rehab Specialist and helped develop the rehab protocol for the entire company and presented it to over 50 doctors. Because of Chad’s passion for human performance, in January 2012 BEAST Performance was born. As owner and Sport’s Performance Director, Chad trained college and pro level athletes. Chad is a certified USA Weightlifting Coach in Sports Performance.

Currently, Chad is in his first year as the Sprints and Hurdles coach for Northwestern States Track and Field program where he develops and implements all practice and training regimens for athletes involved in short and long sprints, relays, 800m, high and intermediate hurdles. Within Chad’s first season he coached the men’s team to match their highest team finish at conference in 10 years, and coached two conference Champions and 7 conference finalist. The team’s overall GPA has rose to the highest team GPA in over 8 years.

Chad is the husband to Megan Leath, and father to two girls, Aniston 3 and Tinsley 2.